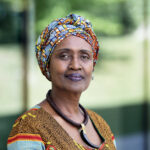 Winnie Byanyima is the Executive Director of UNAIDS and Under-Secretary-General of the United Nations. A passionate and longstanding champion of social justice and gender equality, Ms. Byanyima leads the United Nations efforts to end the AIDS epidemic by 2030. Ms. Byanyima believes that health care is a human right and has been an early champion of a People’s Vaccine against the coronavirus that is available and free of charge to everyone, everywhere.

Before joining UNAIDS, Ms. Byanyima served as the Executive Director of Oxfam International, a confederation of 20 civil society organisations working in more than 90 countries worldwide, empowering people to create a future that is secure, just, and free from poverty.