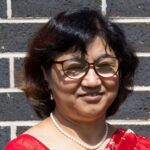 Immediate Past President
Beyond Beijing Committee (BBC) Nepal
About

Shanta Laxmi Shrestha is an advocate of gender equality, women’s human rights and sustainable development. She is one of the SRHR champions and initiated SheDecides movement in Nepal in March 2019 in cooperation with the ARROW. She had worked in the government and in non-government organizations in Nepal, Eritrea, Tanzania, and Zambia.

She is the first Woman National Coordinator of the Human Rights National Magna Meet (HRNMM) and has established Women’s Human Rights Award in 2015 to be awarded to a woman human rights activist of Nepal annually. She has been serving the Beyond Beijing Committee (BBC) Nepal since 2014 fully as the chairperson.