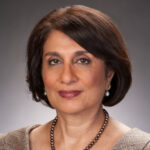 Dr. Rohini Anand was most recently SVP Corporate Responsibility and Global Chief Diversity Officer for Sodexo, the global leader in Quality of Life services. She was responsible for the strategic direction, implementation and alignment of Sodexo’s integrated global diversity, equity and inclusion initiatives (DEI), as well as Sodexo’s corporate responsibility (CR) and wellness strategies. Dr. Anand reported to the Global CEO and was a member of the North America Executive Committee for Sodexo. Operating in 72 countries, Sodexo serves 100 million customers each day. With €20.2 billion ($22.2 billion) in annual revenue, and 460,000 employees, Sodexo is the 19th largest employer in the world. Rohini successfully positioned Sodexo as a global thought leader in DEI and CR and leveraged that expertise to grow the core business by positioning DEI and CR as differentiators. Additionally, by engaging the organization in waste reduction efforts, food cost was reduced by 2-8%.

Under Dr. Anand’s leadership, the Sodexo brand has become synonymous with leadership in diversity, corporate responsibility and wellness. Sodexo received the prestigious 2012 Catalyst Award and ranked in the top 10 of DiversityInc’s Top 50 Companies for Diversity for 11 consecutive years. Additionally, Sodexo was named Global Sustainability Industry Leader in its sector for the 14th year in a row by the Dow Jones Sustainability Index (DJSI) and ranked as the top-scoring company in its sector in the RobecoSAM ‘Sustainability Yearbook 2019’ for twelve consecutive years. Sodexo’s remarkable global culture change, led by diversity and inclusion, is featured in a Harvard Business School case study entitled Shifting the Diversity Climate: the Sodexo Solution as well as profiled in several books on global diversity and inclusion.

Widely considered as a leading expert on organizational transformation, corporate responsibility and diversity and inclusion, Dr. Anand is a published author and has been featured in several articles including articles published in CNBC, The Boston Globe, The New York Times, and the Washington Post. Rohini has appeared on CNN, Bloomberg and CNN Money as well on National Public Radio. She is the recipient of many accolades including the Mosaic Woman Leadership Award, the Women’s Foodservice Forum Trailblazer Award, the Maryland International Business Leadership Award, the American Institute for Managing Diversity’s Individual Leader Award, Webster University’s Women of Influence Award, the Who’s Who in Asian American Communities Award (WWAAC), Ascend’s inaugural Excellence in Diversity & Inclusion Award, and the Diversity Leadership Star Award by Diversity Woman.

Dr. Anand received her PhD from the University of Michigan. She serves on the boards of several organizations including WomenLift Health a Gates Foundation initiative, Aspen Institute’s Family Prosperity initiative, Tent Partnership for Refugees, Galt Foundation, Community Wealth Partners, and Sodexo’s Stop Hunger Foundation. She also serves on the Charter Communications External Diversity and Inclusion Council and chaired the Catalyst Board of Advisors. Rohini is a Senior Fellow with the Conference Board and is a member of their Diversity and Inclusion Institute.