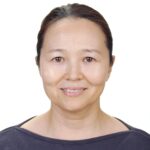 Advisor, Humanitarian Health
Save the Children US
About

Nureyan has over 20 years of public health experience in both emergency and development contexts. She worked with Save the Children and Plan international in a number of key health positions in politically sensitive, culturally diverse and geographically harsh conditions. She has managed multiple outbreak responses, including Cholera, Ebola, Polio, Yellow Fever and Measles. Nureyan has worked to support health systems in South Sudan after their independence, in the Philippines after Typhoon Haiyan, in Sierra Leone and Liberia during the Ebola crisis and in China and Nepal after earthquake, most recently in Mozambique after Cyclone Ida. She has experience in health service delivery for conflict- affected people through her work in Ukraine, Turkey, Syria and Bangladesh.

Currently as Emergency Health Advisor, Nureyan is leading a significant portion of Save the Children’s work in emergency health, including serving as technical advisor to country offices and ongoing responses, supporting new emergencies as first responder, and leading Community Case Management in Emergencies. She co-leads the child health in emergency working group with UNICEF. Nureyan has a Medical Bachelor degree from Shanghai Medical University and Masters of Public Health degree from Tulane University, and she is fluent in Uyghur (native language), mandarin Chinese, and English.