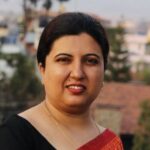 President & CEO
The Story Kitchen
About

Jaya Luintel is a prominent, nationally acclaimed journalist and women’s rights activist. She is the founder of The Story Kitchen in Nepal, which aims to amplify women’s voices and their stories by utilizing both traditional and new media tools. Ms. Luintel brings extensive knowledge and expertise in the areas women’s empowerment, gender equality, gender-based violence, HIV/AIDS, Sexual and Reproductive Health Rights of Women and Sexual Violence during armed conflict in the context of Nepal. She has received a number of fellowships and honors for amplifying the voices of marginalized and excluded population in Nepal.

Ms. Luintel was listed in BBC’s Hundred Influential Women in 2014. She was awarded with the Asia Foundation Development Fellow in 2014, the Global Change Leaders Program Fellow by Coady International Institute in 2016 and Perennial Fellow in 2020. Internationally trained at Radio Netherland Training Center and Deutsche Welle Radio Training Center, she has earned her Master’s Degree in Gender Studies from Tribhuwan University, Nepal.