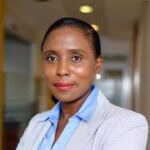 Dr. Catherine Kyobutungi holds a PhD in Epidemiology from the University of Heidelberg, and a Master of Science in Community Health and Health Management. She is the Executive Director at the African Population and Health Research Center (APHRC). She was formerly the Director of Research and has served APHRC in several leadership roles over the past decade, having joined as a Post-doctoral Fellow in May, 2006.

Prior to her graduate studies, Dr. Kyobutungi studied Medicine at Makerere University, Kampala after which she worked as a medical officer at Rushere hospital, a rural health facility in Western Uganda for three years. Before and during her graduate studies, she was an Assistant Lecturer and later a Lecturer in the Department of Community Health at the Mbarara University of Science and Technology. Dr. Kyobutungi has served on numerous boards, panels, and expert groups, including the INDEPTH Network Board of Directors and the Advisory Council of the  African Diaspora Program at the Institute of International Education. She was the inaugural Chairperson of the Kenya Epidemiological Association. Her research interests include migrant health, community participation in health, and the epidemiology of non-communicable diseases.

Dr. Kyobutungi is driven by the belief that Africa has the potential to solve its own problems and she tries to make her own contribution, however small.