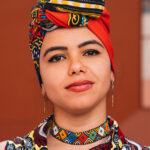 Aya Chebbi is an award-winning Pan-African feminist. She rose to prominence as a voice for democracy as a political blogger and activist during the 2010/2011 Tunisia’s Revolution. She is the founder of Afrika Youth Movement (AYM), one of Africa’s largest Pan-African youth-led movements, and Afresist, a youth leadership programme and multimedia platform documenting youth work in Africa. She is also the first ever African Union Special Envoy on Youth and the youngest diplomat at the African Union Commission Chairperson’s Cabinet.

Ms. Chebbi has served on the Board of Directors of CIVICUS, World Refugee Council, Oxfam Independent Commission on Sexual Misconduct, Women’s Alliance for Peace Advisory Board, the Council of the Africa Public Health Foundation, the The Independent Panel for Pandemic Preparedness and Response among others. She is graduate of University of Tunis El Manar with Bachelor in International Relations, Fulbright scholar at Georgia Southern University and Mo Ibrahim Foundation Scholar for her Masters in African Politics at SOAS, University of London. She received the 2019 Gates Foundation Campaign Award and was named in 2020 Forbes’ Africa’s 50 Most Powerful Women.