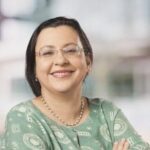 Anita Zaidi is also the Director of the Vaccine Development and Surveillance, and Enteric and Diarrheal Diseases programs at the Bill and Melinda Gates Foundation. Her teams’ work is focused on vaccine development for people in the poorest parts of the world, surveillance to identify and address causes of death in children in the most under- served areas, and significantly reducing the adverse consequences of diarrheal and enteric infections on children’s health in low and middle-income countries. She obtained her medical degree from the Aga Khan University in Karachi, residency training in pediatrics and fellowship training in medical microbiology from Duke University, Durham, NC, USA. She undertook further training in pediatric infectious diseases from Children’s Hospital, Boston, Harvard Medical School, and Masters in Tropical Public Health from the Harvard School of Public Health. Her research has focused on vaccine- preventable illnesses and newborn infections in resource-limited settings, publishing more than two hundred research papers in these areas.

Prior to joining the Bill and Melinda Gates Foundation, Dr. Zaidi was the Ruby and Karim Bahudar Ali Jessani Professor and Chair, Department of Pediatrics and Child Health, at the Aga Khan University. In 2013 Dr. Zaidi became the first recipient of the $1 million Caplow Children’s Prize for work in one of Karachi’s poverty stricken fishing communities to save children’s lives. She was nominated as a notable physician of the year in 2014 by Medscape.