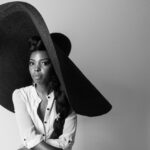 Adelle Onyango is a Kenyan media personality, podcaster and founder of the Adelle Onyango Initiative, an organization that works to create programs that prepare Kenyan youth for employment or entrepreneurship and give African women who have survived rape access to psyco-social support. She gained international recognition for her efforts to empower African women and youth and has been celebrated as one of Facebook’s 2019 Icons of Change; Africa Youth Awards 100 Most Influential Young Africans for 2019; OkayAfrica’s 100 extraordinary African women for 2018; and BBC’s 100 inspirational and innovative women in the world for 2017.

Ms. Onyango has over 10 years experience in the radio industry. She began as a drive show host on 1FM then moved to Kenya’s top media house, Radio Africa Group, as a presenter on their radio station, KissFM. She hosted the mid-morning show and created a show dedicated exclusively to African music which was a first of its kind on the station. She later moved to host their prime breakfast show until June 2019. She then left to focus on podcasting – creating two podcasts – Legally Clueless & PursePective.